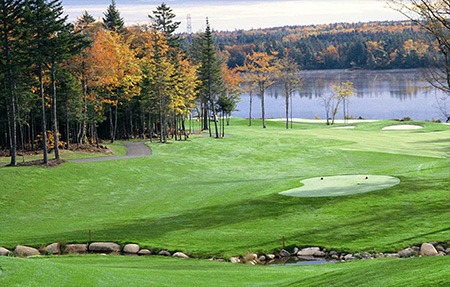 Glen Arbour is the first upscale public course created in the region. While commonplace in Toronto, the pristine conditions and readily accessible location outside of Halifax have made Glen Arbour popular for corporate outings. And while it doesn’t have the rustic nature common to golf in the region, it is a great course for easing players into the trip ahead of them.

Created by Montreal architect Graham Cooke, the course is routed alongside several inland lakes and ponds as the golfer walks into an isolated world full of wide fairways and tricky greens. The best holes—which include the 14th, a par 5 that plays 504 yards with Bottle Lake running down the entire left side of the fairway, and the 207-yard par-3 17th, with its small green perched amidst wetlands—are standouts on a course with many remarkable holes. The course’s yardage tops out at 6,800 yards, but Glen Arbour plays slightly shorter given the proliferation of downhill shots. “It is a handsome piece of property that rises and falls around three natural lakes,” said Ian Cruickshank in the Toronto Star. “It can be a tough test though, with fairways that tend to tilt away to the forest and raised greens.”

The course has also seen its share of top tournaments, including the CP Women’s Open, and the Telus Skins Game. “You have a golf course on the outskirts of Halifax that is one of the finest in Nova Scotia,” wrote Tim Mc-Donald on GolfCanada.com.